The day was so hot it made your toes sweat. A light breeze only made it slightly bearable. At least the bugs were staying close to the water and not in the boat.


I threw my legs up on the end of the boat and slathered on more sunscreen, which melted off instantly. It would be a miracle if I didn't get a sunburn, no matter what SPF proof I put on or how many times I reapplied.


Captain Dad trolled the boat in circles near the damn, the deepest part of the lake. My brother-in-law, Jim, kept rubbing his head, while my husband, Mike, played with his fishing line, trying to keep his mind off the heat.


"Look, it's Mr. Walleye." Captain Dad pointed to a blue and white boat in the distance. "If he's out here, it must not be a lost cause. He's the best fisherman out here, by far."


My heart skipped a beat, Captain Dad was right, no one could catch fish like Mr. Walleye. Even though he was thirty years my senior, I had a crush on his fish whispering capabilities. I wanted to be Mrs. Walleye.


"Did I ever tell you about the time he caught Ol' Nellie?" Captain Dad asked.


I shook my head, too hot to utter the words 'no'.


"It took Mr. Walleye four hours to reel her in. She weighed close to 23 pounds and is an Oklahoma record. I was out here fishing with Joe when Mr. Walleye caught her, we watched the whole show. It was a good thing Mr. Walleye had his son out here to help, without a netter there wouldn't have been any way Mr. Walleye would've got her in. Funny thing though, as soon as Mr. Walleye started towards shore, there was a massive wave. I swear I saw a fish twice Ol' Nellie's size jump out of the water. Mr. Walleye said that was Ol' Willie, Ol' Nellie's mate."


Jim laughed. "Yeah right! A 46 pound walleye, a doubt any fishing line could even hold that monster of a fish."


"That line you've got on right now could," retorted Captain Dad. "I've lost too many lures to snapped lines, this time I put on the good stuff."


"Of course you could," said Mike with a smirk. "I'll hold on to your waist so you don't go for a swim."


"That was close to 10 years ago," said Captain Dad. "I doubt he's still alive and if he is, you can bet he's close to 60 pounds. Probably just laying on the bottom like a log." He looked at me. "But if he was to be caught, you've got the right kind of lure."


As if on cue my line shot out. I grabbed the pole and turned off the clicker.


"Are you snagged?" asked Jim.


"Nope, definitely a fish and a big one," I yelled back, struggling to keep hold of my pole.


The fish jumped out of the water. My mouth gapped open as I studied the walleye the size of a small shark.


"It's Ol' Willie!" Captain Dad yelled, kicking the boat into reverse as Ol' Willie made a run for it. "Hold on!"


The pole lunged forward slamming me into the back of the boat. I thought I was going over before two strong arms grabbed my waist. Looking over my shoulder, I gave my husband a weak smile of "thanks" before focusing my attention back to Ol' Willie.


"Any time there's slack, reel as hard as you can. Your line won't break but your poll might." He turned causing slack. "If you go in, let go of the pole. You can buy me a new one. But don't go in!"


I glanced at Mike. "You're not going in," he assured me.


Ol' Willie jumped again, so close to the boat a wave threatened to capsize us. "Reel!" Captain Dad yelled.


For the next two hours we played tug-of-war with the giant walleye. My arms burned and my fingers started locking up. A blister pulsed just below my belly button where the end of the pole was locked in place. Mike kept his sturdy hands around me, as Jim stayed ready with the net. Captain Dad foresaw every move Ol' Willie made, keeping us in pace with the monster.


The line suddenly grew limp. "He's off," I said relaxing my arms. "The line's totally slack. He must've broken it."


"No way," Captain Dad threw the boat into neutral. "Keep reeling, that line couldn't have broken."


"Maybe you should take over?" I said, turning to Mike.


"It's your fish," Captain Dad stated, "and you're gonna bring him in."


I started reeling again, certain my arms were going to fall off, but thankful that the line was limp. Just then Ol' Willie came soaring right for us. He crashed into the center of the boat, cracking it down the center. Jim flew to the left as the rest of flew to the right.


I grabbed the side of the boat as water came rushing in a notable absence around my waist. Where was Mike? Jim scrambled to put his life vest on as the port side of the boat drifted away from us, but still no Mike.


Soon he surfaced from the water near Jim, climbing onto the port side wreckage. I released the breath I'd unknowingly been holding. "I'm ok," yelled Mike, grabbing the oars from the port side cubby. "We'll go for help."


I turned to see where my father was as the line jerked again causing me to swing around. Captain Dad grabbed my waist. "Don't let that son of a bitch go! He wrecked my boat!"


I braced myself on what was left of the aft side of the boat and pulled back. Ol' Willie had made it personal.  "He's not going anywhere."


Gritting my teeth I reeled as hard as I could. Inch by inch, I made ground on Ol' Willie as he pulled our broken boat toward a sand bank.


"You've got to get him in before he hits that bank or we're done!" yelled Captain Dad.


Giving a quick nod, Dad grabbed the pole with me and pulled back as I reeled. I let out a fierce scream as my fingers started to bleed. Ol' Willie was on top of the water now, flopping like a tazed criminal. Captain Dad continued to pull as I reeled the walleye to the side of our broken boat. Letting go of the reel I grabbed Ol' Willie and dragged him into the boat, laughing hysterically.


Captain Dad slumped in the chair and glanced down at the fish. Ol' Willie gulped for water and we both gulped for air. Exhausted Captain Dad donned his fish glove and hook scissors, removing the lure from Ol' Willie's upper lip.


"We don't have a camera," Captain Dad stated. "No one will believe us."


"It ok," I said as I pushed Ol' Willie back into the lake. "A true fish story doesn't need pictures."


*Some of the names and actual occurrences have been changed in order to protect the innocent. 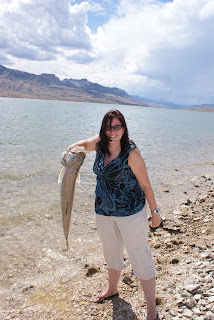 May or may not be me with Ol' Willie ;o)
on June 24, 2012
Email ThisBlogThis!Share to TwitterShare to FacebookShare to Pinterest
Labels: Fiction
Newer Post Older Post Home