“Man isn’t meant to swim or float,” Harold thought.  But here he was on the hottest day of the summer in his black Sunday jacket and vest with hundreds of other yahoos on the dinner cruise his wife, Doris, had won.


He shifted his feet as he waiting for the boy behind the camera to take their photo with the Simpsons, the neighbors Doris had invited along.  His shoes were already rubbing his heels raw and they still had to tour the monstrosity called, Freshwater Shores.


Harold groaned. It was that weasel, Simon, the one who talked Doris into buying the raffle tickets in the first place.  Harold cared for Simon as much as he cared for sailing. The man carried a purse, for crying out loud. Simon called it a messenger bag, but it looked like a purse to Harold.


Simon slid into the picture just before the snap, causing Harold to furrow his brow.  The picture taken, Harold walked to the rail.  They were a good mile from shore.  The thought turned his belly.


“Come on, Harold.” Doris' sweet voice flowed over his thoughts.  “It’s time for the tour.”


Harold stared at the cave that passed for a door into the belly of the beast.  “You go ahead. I’ll meet you at dinner.”


Standing on the vacant deck, Harold took a deep breath, trying to settle the nausea that threatened to turn violent.  It was no use. Harold leaned over the rail, certain the contents of his stomach were coming up.


His eyes widened as the rail groaned, then popped. The latch on gate he was leaning on gave way and swung open, causing Harold to tumble forward.


He grabbed for the rail, the gate, anything to keep him from hitting the water.  But his hands caught nothing.  Landing face first in the lake, Harold tried to remain calm.  Finding the surface, he gasped for air, arms flailing over his head.  The boat barreled ahead of him.  He screamed, only to have his mouth engulfed with water.  Coughing he went under again, lungs filling with liquid as his heavy jacket pulled him down.


Panic encompassed him as he tried to remember where the surface was, but only one sentence tore through his mind, “Man isn’t meant to swim or float.” 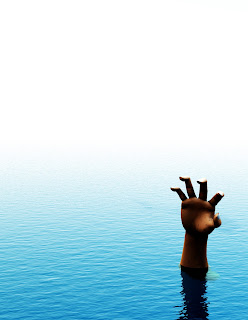