I received an advanced reader of this book and regretted being too busy to read it. This isn't a genre that I usually pick up, but this one definately peaked my interest. But just because I'm too busy chasing a deadline, doesn't mean I can't share this new book with y'all. Enjoy! 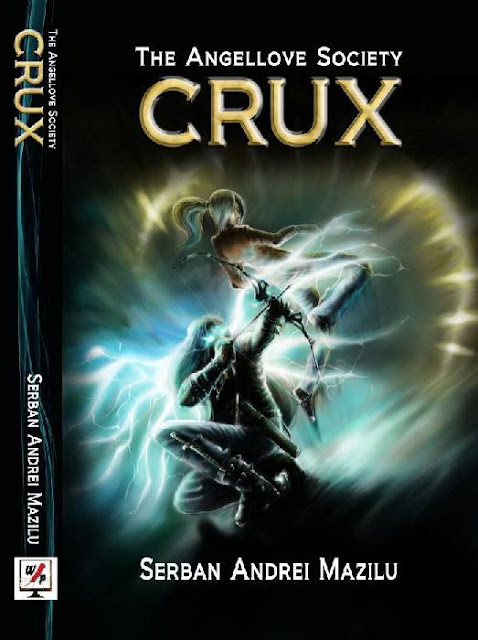 The mysterious planet Crux suffers silently with a terrible ancient curse. Holy entities and scheming lords of Hell manipulate their children like pawns in an agonizingly long game of chess, while the first Cherub Innanna, creator of the realm and savior of the Nephalem, is shackled inside a pocket dimension in eternal exile. Meanwhile a savior – the mysterious Nilithar - is summoned to Crux.

The events to follow haven’t caught only the attention of the Cruxians, but the Angellove Society’s as well. The fabled group investigates the ancient prophecy through Thomas and Andrew, a powerful half-vampire and a mage of unthinkable potential, who travel across galaxies to find the girl.

Forces beyond imagination will clash in an epic battle of Light versus Darkness, as Crux changes not only its landscape, but its inhabitants as well, and the strangest and most unlikely of heroes will rise and stand against complete annihilation.

Andrei began expressing his talent on paper ever since grade school, but it was the high-school years that shaped his style and vision. The high-school paper represents his jump-start and the winning of several regional prizes encouraged him to press on.

2001-2003: He attended the Romanian-Canadian University of Journalism in Brasov for two years, showing a keen interest in radio. Sadly, he was forced to drop out and follow a more financially wise strategy.

2003-2004: Andrei took his chances with a new college, attending courses at the Ovidius University, specializing in technical engineering and welding, back in his home town by the Black Sea.


The years 2004-2009 took him on a different path, as he enrolled at the Maritime Academy, to become a deck officer in the commercial navy. Although forced to focus his mind on subjects like mathematics, physics and all sorts of navigational and engineering disciplines he never lost his love for writing.


During that period, Andrei started several blogs, approaching many and different subjects; literature of course was always one of them, but trained now as a real editor, he also chose to speak his mind about pressing political and social matters, attracting the attention of quite a few local public figures (who still follow his works today) with his stinging articles.


His passion for fantasy stories also drove him to continue creating and even start several projects. In 2006 he started writing a horror-fantasy novel in Romanian, hoping to be the first to approach this style and publish in his home country.


In the autumn of 2010, while on board a ship called S.P. Auckland, Andrei started writing a short fantasy story. It started as a way to pass the time and soon transformed into a serious project on which he worked on and off for almost two years. With the support of his readers, friends or just acquaintances, who reassured him that the novel's worth the time, Andrei forced himself to finish it...

And he did! On May 24th 2012, his first (and definitely not the last) novel was complete. Crux, his debut novel, is the first book of a fantasy series called The Angellove Society. Two weeks later, the novel was registered with full copyright under the Romanian laws.

The Cat Factor
For further information, you can directly contact Andrei at: