A Case of the Januaries

I won't be at all surprised if Baby Girl grows up with a bad case triskaidekaphobia. That's the fear of the number 13. So far 2013 has not been kind to her. She's had a lot of "firsts" already this year, too bad they have not been the good kind.


Baby Girl brought in the year with a new tooth. We are always happy to see a new tooth, and we were even happier to see she actual has two teeth (top and bottom) that meet so she can chew her food instead of mushing it to death. But as all parents know, the entry of a new tooth to the chomper family means days full of a fussy, slobbery, mess of a child. But the tooth broke through and the crunching of graham crackers began.


It was just after the second week of January that things got hinky. During a "Wellness" check at her pediatrician's office she picked up her very first stomach bug. And not just a 24 hr yuck fest, we had an entire week of vomiting and explosive diarrhea, a lot of which happened at the same time (not enough Scentsy in the world).


Thinking we were finally over that, I sent her to Mother's Day Out, cause Momma needed a Mother's Day Out in a bad way. Not only was I exhausted (I tried to heat up a bowl of soup in the cabinet instead of the microwave y'all, exhausted doesn't cover it), but I had two fast approaching deadlines and I really, really needed a shower. No sooner had I toweled off, when I got a call from the school. Baby Girl had vomited all over her lunch. So we went another 2 days fighting off this stomach virus. She was .3 lbs away from being put in the hospital, thankfully she took a turn for the better before it came to that. But Baby Girl lost 1.7 lbs in 5 days.


So stomach bug conquered, deadlines approaching, still behind, but making it work. I leave for a meeting with a friend and come home to find out Baby Girl has stopped walking. The Hubs said she just stopped and started crawling instead. No idea why. We chalked it up to her being tired, but the next morning she still refused to walk. So back to the pediatrician's office we went (at this point they had given us our own parking spot).


Thankfully, with the benefit of a bouncing ball she did "walk" for the doc, but with a limp and not very far. He decided it was just a tweaked ankle or knee and that she'd be ok. He suggested I give her Tylenol, which I've decided is their standard response to everything (splinter - Tylenol, cough - Tylenol, hiccups - Tylenol). The Tylenol did wonders, so much so that by that evening she was running around chasing The Hubs. That's when it happened. Her foot gave out and she fell face first onto the tile kitchen floor, giving herself her first bloody nose and sending me into complete hysterics (I'm buying her a bubble!).


Long story short, she went to Mother's Day Out a total of three times out of nine... 3 out of 9!! So I think we're both thankful it's February and I'm hopeful it won't be a year full of Januaries. 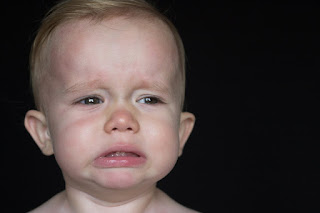 This is not Baby Girl (she's cuter) but this is what a case of the Januaries looks like.
Source
on February 04, 2013
Email ThisBlogThis!Share to TwitterShare to FacebookShare to Pinterest
Labels: Baby Girl, Januaries, Slice of Life, The Hubs
Newer Post Older Post Home