So Day 2 will be a bit different, you don't need a "slide show" verison of my trip, no one wants to sit through that. So instead I will be sharing an interesting story of the day. For pictures, please see my Facebook page (aka friend me at either Author Jennifer McMurrain or on my personal site if I've met you on my trip)... I hope you enjoy.

Another beautiful day in Aberdeen. Before I share today's story, I must say that Aberdeen has some of the nicest people. A big thanks to Linda, Jill and Kali at Simpson's and Don from Scottish Explorer/Whytes for all your information and help today. Y'all are a lot of fun (and Linda I hope you get some rest and I thought Americans worked long hours). Also, I'd be remiss if I didn't mention The Hub's Scottish co-workers, Jill, Gordon and Ryan -- it was an absolutely fantastic dinner, thanks for the invite.

My morning started off inocently enough with breakfast. I ordered a traditional Scottish breakfast, which included a couple of eggs, bacon, sausage and black pudding.

Now, all but one of these items felt safe. But, as I've said before I'm here to try new things, and the local food so I took a bite of black pudding. Then I gave The Hubs a bite. We both agreed it was not something we would like to eat again.

Our breakfast continued as The Hub's coworkers, Kat and Casey came down to join us. As they debated what to have for their own breakfast, we started to discuss the black pudding.

"You know what that is?" asked Kat.

She just raised her eyebrows when Casey said, "Linda at the front desk said it was like our pudding."

Kat again raised an eyebrow, then decided the continental breakfast was the option for her. I could tell Casey was still on the fence.

Casey came over and took a bite. "That's not bad," he said as The Hubs took out his phone and started to Google.

We all kind of looked at each before Casey exclaims, "Who does that? Who looks at blood and thinks, 'I should make something out of that?'"

I crawl into the taxi with everyone after work to go to dinner, the first words out of Casey's mouth are, "Seriously, who does that?" 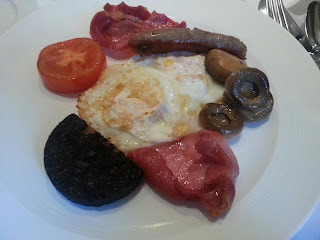 On the menu tomorrow: Haggis