Two years ago my life changed dramatically. It all started at 5:30 am, yes, in the morning, like before the sun came up. Actually, scratch that, it started earlier around 2 am. I was having (what I thought were) Braxton hicks, so I moved to the couch so I wouldn’t wake up my husband who had to work the next morning.


My water broke at 5:30 and I dove off the couch. There was a huge part of me that thought I’d just wet myself. I mean, it wasn’t like you see in the movies. It was a trickle, not the big “splash” you see on the movies. I’ll spare you any more details, but I called Labor and Delivery, and they told me to come in.


So I woke my husband and told him I was in labor. It then took him almost an hour to get ready to go to the hospital. Don’t ask me what he was doing, I have no idea. The contractions had hit and I was just busy breathing.


We finally made it to the hospital and they agreed I was in labor. Now my plan was to always have an epidural. Pain is not my thang. Kudos to every woman who has gone the natural route, but I knew from the get-go that I was not one of those women. But, someone had told me to be careful, because if I got my epi too soon, it would wear off during the heat of labor. So I waited. I waited for 5 long hours.


At some point the charge nurse came and put oxygen on me, said there was some concern with the baby’s heart rate and they just wanted to make sure everyone was getting enough air. I think I nodded, but the pain was making everything blurry. 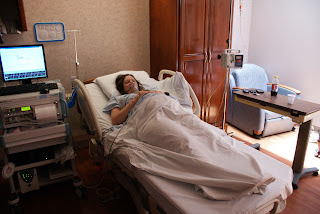 Finally, my OB/GYN came in and asked me about pain management. I told him my plan and what I’d heard and he was like, “If the bag runs out we’ll just give you more. When do you want it?”


Me: “NOW, now is good.”
Unfortunately, for me, it was a busy day in the delivery ward and there were a number of women ahead of me. It felt like forever. Finally, the drug doc came in. I sat on the edge of the bed, back arched like a cat, contractions kicking my butt and he told me to hold very still. So I did.


Then a gnat came at landed on the epi equipment, which meant they were no longer sterile, which meant he had to open a whole new kit, which meant I had to continue to sit there, on the edge of the bed, back arched like a cat, while contractions were going all Karate Kid on my insides, while he opened a new kit. Let’s just say, that gnat is Satan’s pet.


Finally, dear sweet relief. I was able to talk again, I even put in my contacts. Then the charge nurse came in again and explained that every time I had a contraction, Baby Girl’s heart rate was slowing down. There was some concern that the cord was wrapped around her neck. But I remained calm and I remained calm because my charge nurse remained calm.


Finally, my parents and sister came. It only took me going into labor for them to finally visit the ‘Ville. They weren’t able to stay long because it was time to push. I’m going to be honest, I was scared. But, I had faith it would all work out. And it did.


Thanks to the epidural, I couldn’t tell anything was really happening and kept asking if I was doing it right. They said I was and apparently I was, because out popped Baby Girl. She cried, I cried and The Hubs took pictures of our gooey girl. There was absolutely no evidence of the cord being wrapped around anything. She was perfectly healthy and I was euphorically happy. 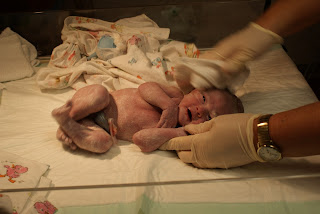 Here we are two years later. It’s gone by at a crazy speedy pace. I’ve been told the next 18 years will go by this fast. I surely hope not, I want as much time with her as possible. As much as I can’t wait to see her grow, I also want time to stop. 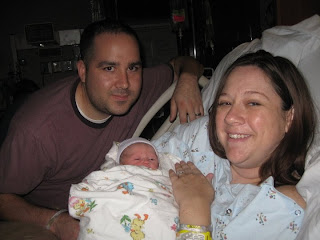