Because of a Bite

It was a glorious Saturday. The first tolerable day in a while, so I was not at all surprised to see Baby Girl and The Hubs outside playing in the water. What did surprise me was the big ol' bug bite on the back of Baby Girl's arm.


I shrugged it off, kids get bit. She loves being outside and bugs love to bite people who are outside. I let her play and decided I would put some anti-itch cream on it when we got inside. But once inside I got a closer look at the bite and noticed a bulls-eye ring around it. 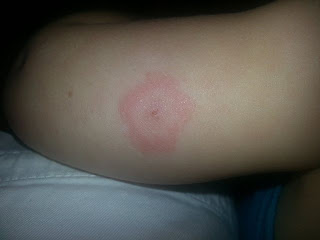 The bite in question


Of course, we Googled. I sent pictures to my Mommy friends and to my own Mommy. They all pretty much said the same thing, better take her to the doctor. Well it's Saturday, so seeing the doctor meant a trip to the ER. I wasn't sure it merited a visit to the ER, so I called our pediatrician. One item kept coming up more than any another, tick bite.


But I hadn't pulled any ticks off her, neither had The Hubs. A friend informed me that her daughter had pulled a tick off herself when she was Baby Girl's age. That's when the panic started to creep in. I have a friend, who lost his 2 year old daughter to Lyme Disease. Not too long ago he posted a picture of his daughter and that imagine flashed through my brain and my mind was made up. We were going to the ER.


As we walked into the hospital The Hubs said something only a rookie would say, "The parking lot isn't too full, I bet it won't be too crowded."


I immediately hushed him and told him he was going to jinx us. You don't say things like that before you walk into the ER. Thankfully, though he was right and we were in and out of there in less than an hour. Baby Girl had a grand ol' time playing on the skinny bed and looking at all the medical gadgets. They looked at the bite, said we'd probably never know what bit her, and gave us antibiotics to rid off any infection.


We expressed our concerns about Lyme Disease and the physician confided that it was a very real concern, that her husband had almost died of it a few years ago. She gave us the symptoms of what to look for, but informed us we wouldn't see any of these symptoms for 4 to 6 weeks. 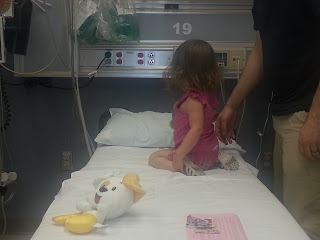 Playing with all the gadgets, Bubble Puppy by her side.
We came home, gave her a dose of antibiotics and a popsicle and sent her to bed. Then we tried to relax, but my friend's daughter haunted me. I woke up every hour and checked on her in the nanny cam.


I know only too well that this life is temporary. Losing my sister at the age of 24 from Leukemia taught me that life is fragile and way too short. I spent most of the night praying that it wasn't a tick, praying that my Baby Girl would be fine. All due to a bug bite.


God did answer my prayer, in a way, when we got her up Sunday morning, she had another bite, confirming this was no tick bite, but probably a spider bite. Not that I wanted her to be bit again, but it did put my mind at ease.


And now, I'm going on a spider hunt.

*Update:
We went to her pediatrician's office today and he thinks it's fleas. Totally mortifying, but I've been all over this house and our pets and haven't found evidence of any fleas. The Hubs and I don't have any bites either. She could be getting bit outside, though. So we're stopping the antibiotics for now and just using Benadryl and Cortizone-10 (it's very likely she's scratching the bites at night).

I've caught a lot of flack for taking her off the antibiotic in Facebook land. I understand their concerns (and I appreciate them because they are coming from a place of love), but Baby Girl isn't acting sick and I'm a firm believer that sometimes Doc's give antibiotics because they don't know what else to do. I trust my pediatrician and just because I've stopped the antibiotics, doesn't mean I'm going to not watch the situation carefully. I'm not saying he's 100% right on it being fleas, (especially since I haven't found any) but it's an allergic reaction and we're treating it as such, regardless of the culprit.

I had the pleasure of washing both cats tonight, just in case, while The Hubs flea powdered, then vacuumed Baby Girl's room. All the sheets have been washed, so hopefully in the morning we have no new bites.
on July 01, 2013
Email ThisBlogThis!Share to TwitterShare to FacebookShare to Pinterest
Labels: ER, Lyme Disease, Slice of Life, Spider bites, Ticks
Newer Post Older Post Home