Today was the day. It was time. It needed to be done. Bucket List items don't just check themselves off. Now I have to admit I was afraid. Not of the spirit of Mrs. Winchester, but the typhoon of the terrible two tantrums. We've had a meltdown every day and the last thing I wanted was to get to the Winchester House only to have Baby Girl go into a fit and have to leave. But it was time. We were going to the Winchester House.

She had had a pretty easy-going morning. She played with her guppies and farm animals in the bathroom (she loves the pocket door) while I perused Facebook, killing time before the Winchester house opened. When I told her it was time to go, she grabbed her cow and pig and out the door we went. No fighting, no struggle.

I, of course, was skeptical. I just knew it was some kind of a con game. We drove to the house and the minute we got out she started saying, "Castle!". And it did look like a castle, well an American castle anyway. We bought out tickets for the mansion tour and then played in the courtyard. 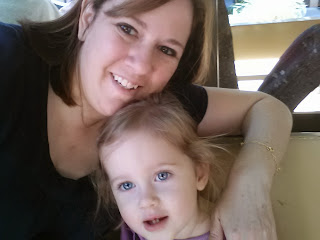 Gotta have the selfie. 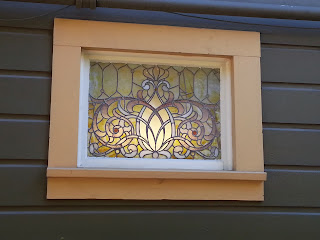 Beautiful Tiffany stain glass windows that were throughout the mansion. 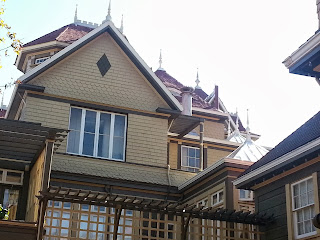 Baby Girl's castle
Unfortunately, everything in the house is copyrighted so there is no picture taking inside. But here is a picture I got off Google of Mrs. Winchester. It is the only known picture of her at the house and she was a super tall 4'9" and some of the doors and ceilings are a testament to that.

I don't know where this guy got all his pics (probably Google as well), but it's a pretty accurate retelling of what the tour guide told us today, aside from his personal beliefs on why she kept building.
Of course, everyone wants to know if it's haunted. This is what I can tell you. My "ghost vibe" never went off. Usually, I know when I'm not alone and I never got that feeling inside this house. Of course, it's a huge house and we only covered a fraction of it. There was only 1 unexplained thing that happened while I was there. As I turned the corner to go into the next room, there were 3 loud bangs. The lady behind me turned the corner and there were 3 more loud bangs, then nothing. Now, the banging came from the wall right beside me and there was no one behind it. It was a little creepy, but I'm in a house full of tour guides, guests and staff, it's hard to debunk anything with that kind of traffic. But it was pretty cool, given ghostly hammering is one of the sounds claimed to be heard.
What I will say is Mrs. Winchester was quite the environmentalist for her day, she had many water saving "gadgets" in her house including slanted countertops by the sinks and a slanted roof in an upstairs conservatory to make sure any water that spilled over there ran into the gardens below. She was also infatuated with the number 13 and daisies, which is apparent throughout the house.
Baby Girl was a complete doll during this hour and fifteen minute tour, so once it was over I let her run (literally) the beautiful gardens. 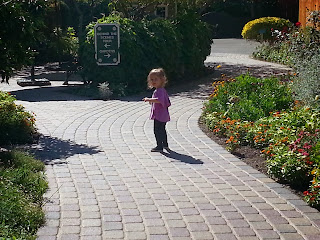 Are ya comin' Momma? 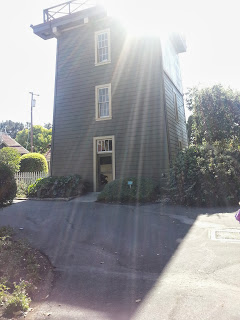 I love how I caught the sun behind this tower. 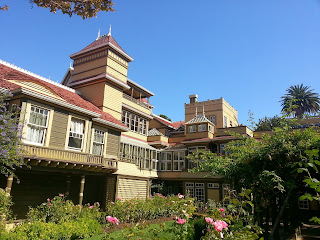 The rose gardens at Winchester. 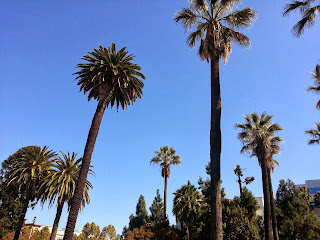 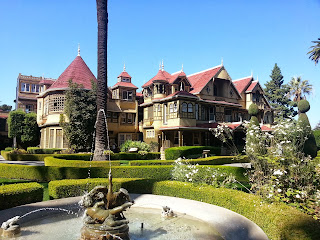 Iconic view of this beautiful house. 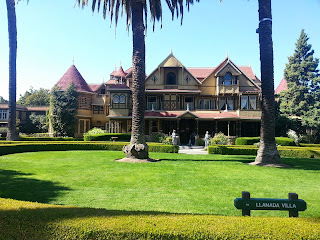 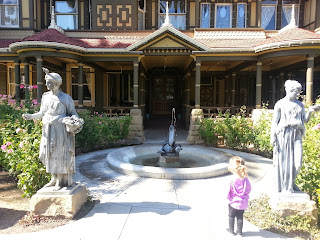 Baby Girl checking out the Serpent Fountain at the entrance of the house. It is said President Teddy Roosevelt came to pay Mrs. Winchester a visit, but one of the staff didn't recognize him and told the president that if he wanted a job, he'd have to go around to the back like all the other staff. President Roosevelt was so insulted he left and never came back. Those front doors are the ones he's said to have gone to. 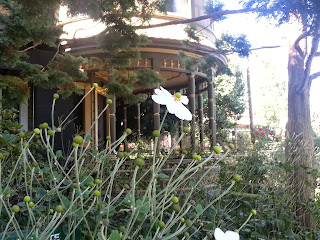 Porch railing and lovely flower.
Even though I didn't see any ghosts, it was an awesome day. So awesome Baby Girl and I took a two hour nap! In my defense I did carry a 2-year old over a mile through narrow hallways and steep stairs, I think I deserved a nap.
It was time to get Mike and I still had one last Bucket List item to check off before leaving San Jose. I hit Google and searched for a place I could get authentic San Francisco sourdough bread. Thankfully, I came across Boudin San Francisco Sourdough so I didn't have to drive back to San Fran (that traffic is beyond crazy y'all).
I had the clam chowder in a sourdough bread bowl. 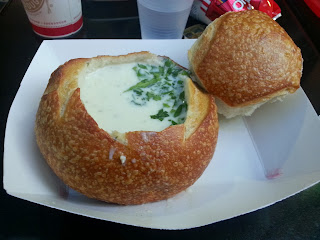 Bucket List #5 - check
The clam chowder was pretty awesome, the bread was good, but didn't blow my mind. A little note for all you clam chowder fans, cilantro does not work in this soup. I learned to eat around the cilantro. Had I known they put cilantro in it, I would've asked them to leave it off.
Because, Baby Girl had been such an awesome kid we decided she needed an awesome gift and took her to the Build-a-Bear workshop. She made herself a stuffed puppy, named Puppy (hey, she's 2). She kissed the heart and even gave him a bath. 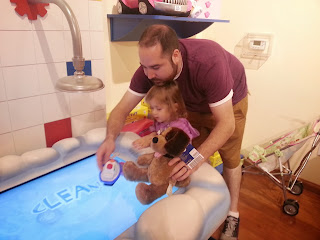 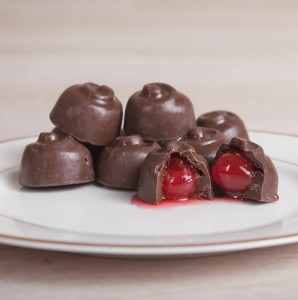 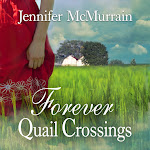